by Peter Davey, American Window Film, Inc.
We put on gloves and masks to stuff pink fiberglass in every nook, cranny and crevice we find. We drill holes and blow cellulose into walls and attics. We spray foam into every space we can’t get into otherwise. However, the greatest source of heat loss and gain in any building is through its windows. Windows account for 10 to 25% of heating bills according to the EERE (U.S. Department of Energy/ Energy Efficiency and Renewable Energy). 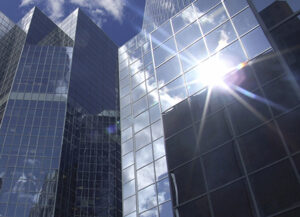 You could cover up your windows with pink fiberglass…or install window film, a product that insulates windows. 3M Company provides sample cards for every insulating window film they offer. Every card includes the particular film’s U-Value – its insulation rating. UValue is measured by the amount of heat that escapes through a window. The lower the U-Value, the better the insulation and the better job the film does in keeping out heat and cold.
American Window Film, Inc., an ENERGY STAR partner, carries 3M™ Window Films that significantly reduce heat loss, heat gain and energy consumption while lowering utilities bills. 3M Company recently received the “2008 ENERGY STAR Partner of the Year Award for Sustained Excellence”. Presented by the US Environmental Protection Agency and the US Department of Energy, the award is given to organizations for their outstanding accomplishments in reducing greenhouse gas emissions through energy efficiency.
Insulating, Low-E window films should be a requirement of any energy conservation program. Commercial customers justify their investment in 3M™ Window Film by the utilities cost savings they provide. As a 3M™ Window Films Authorized Dealer, American Window Film, Inc. can provide a comprehensive energy analysis that includes return-on-investment projections for large commercial customers. Many 3M™ Window Film installations pay for themselves within three years, conservatively. With energy prices so high, return-on-investment is arriving more rapidly.
If that is not incentive enough, commercial property owners and leaseholders may qualify for tax deductions as outlined in the Tax Relief & Health Care Act of 2006 and the Energy Policy ACT of 2005. Originally set to expire 12/31/2007, commercial building deductions have been extended through 12/31/2008 for qualifying products and improvements to a building’s energy efficiency (http://www.irs.gov; “Commercial Property Owners and Leaseholders Qualify for Energy Efficiency Tax Deduction”, 8/12/08). Check with your tax consultants for specifics.
3M Low-E window films were specifically designed to conserve energy. Featuring Wavelength-Selective metals which block more of the solar spectrum than conventional metals, they can reduce air conditioning costs by blocking up to 73 percent of the sun’s heat. They also reduce heat loss by up to 30 percent. Patented construction enables their metal coating to reflect more interior room heat back into the room. Personal comfort is improved and reduction in drafts and fluctuations in temperature can generate considerable savings on fuel expense.
3M™ Window Films can enhance the performance of Low-E windows. A Low-E window can block up to 90 percent of UV radiation. The same window with 3M™ Window Film installed will block more than 99 percent of the UV radiation that contributes to heat loss and gain. In addition, by holding broken shards of glass in place, 3M™ Scotchshield™ Films will improve the safety of Low-E windows that do not typically protect against flying glass unless they are tempered. Also, Low-E windows do not ordinarily reduce glare since most have a visible light transmission greater than 70 percent. 3M™ Window Films can reduce glare up to 80 percent.
A $24 billion diversified technology company and an ISO9002 certified facility, 3M has responded to demand for a high clarity, non-metallic window film. Their Prestige Series window films reject up to 97% of Infrared without using metals. Metals can corrode over time in moist conditions and can interfere with cell phone signals and Wi/Fi transmissions. 3M Prestige Series window films unconditionally guaranty against corrosion. They offer high optical clarity, low reflectivity and incomparable performance. They reflect and absorb 99.9% of the UV light that fades fine furnishings, and they do this by aligning more than 200 layers of polymers in a total thickness that is less than 1/2 the thickness of one 3M Post-It™ Note.
A professional window film installation is quick, clean and inexpensive. It pays for itself in short order and continues to save on heating and cooling expense. Since windows are the greatest source of heat loss in any building…a window film installation should be the insulation priority.
Peter J. Davey is President of American Window Film, Inc., a 3M Authorized and Certified Prestige Window Film Dealer, located in Boston, MA and Atlanta GA, 800-274-TINT. Published in the New England Real Estate Journal, September 15, 2008.
American Window Film, Inc. is your 3M Window Film Dealer serving all of MA, RI and southern NH, including Boston, South Shore, North Shore, Cape Cod & the Islands, Providence, Nashua, Manchester, Worcester, Springfield and surrounding communities.